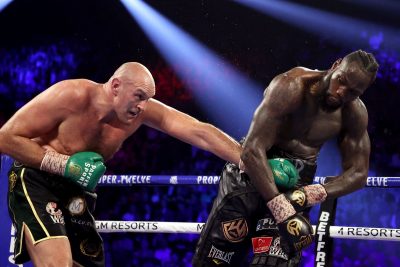 This blockbuster rematch as the fight of a decade as the last fight ended in a controversial split decision.  The buildup had been going on for quite a long time as the two boxers were the only two undefeated heavyweights left in the world. Tyson fury had a record of (29-0-1) and Deontay Wilder had a record of (42-01) with 41 knockout’s. Tyson Fury weighed in for the fight at 273 pounds which is 42 pounds heavier than his opponent Deontay Wilder who weighed in at 231 pounds. It was clear that Fury had been packing on the muscle as he had gain 17 pounds since their last bout.

The odds for Wilder to win were -105 as he was the favorite and Fury was the underdog with +105. There was also many bets on what the apparel being worn to the ring such as Wilder wearing a mask or a fighter losing a mouthpiece during the fight.

It finally came to fight night on February, 22, 2020 the ring entrances were awesome as Tyson Fury came to the ring being carried in a throne. Deontay Wilder wore a 40 pound suit to the Ring which he later blamed for the loss saying it weakened his legs. The fight was set for 12 rounds for the WBC and Lineal heavyweight titles.

The fight began by Tyson Fury coming out hot winning every round leading up to his TKO victory in the seventh round. Tyson Fury was issued a caution for holding in the fifth round. Before his TKO Fury knocked Wilder down twice, after Wilder’s eardrum burst his corner threw in the towel in  the seventh. After the victory Tyson Fury got the whole arena to sing “American Pie” with him.

Fury said ” The world was watching and Deontay Wilder never went down easy.” He also proclaimed, “I am ready for the rematch if Deontay is up for it.” He said that he had a style change which allowed for the victory. This was a big win and now Fury is the only undefeated heavyweight left in the world and we are all eagerly waiting for the rematch.