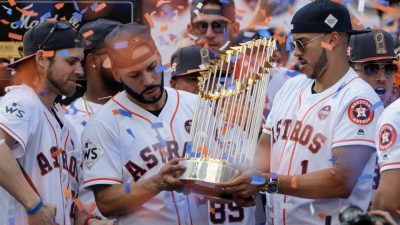 The Houston Astros were stealing opposing teams signs using technology during the 2017 and 2018 season. They illegally used a camera system that had a view of the catcher’s signs and the pitcher’s pitch that was coming. Staff watching the camera feed from behind the pitcher would let the batter know what pitch was coming. Astros general manager Jeff Luhnow and field manager A.J. Hinch were suspended the whole 2020 season, but were later fired by the Astros the next day. The Astros were fined the maximum allowable $5 million and forfeited their first and second round picks in the 2020 and 2021 drafts.

Many players were in disbelief and were stunned. Many were mad and believed that the Astros 2017 World Series win should be stripped.  Nick Markakis, a 14-year veteran, said that the Astros got off “scot free” and criticized the MLB commissioner, Rob Manfred, who conducted the investigation.

This is a bad look for the MLB because they didn’t get any real consequences. Without the sign stealing, would Jose Altuve have still won AL MVP? Would the Astros still win the World Series? Aaron Judge showed his disbelief. After getting beat this past season in the ALDS, he was wondering if the Astros cheated during that game? Aaron Judge was the AL MVP runner up and most likely would’ve won it if he brought the Yankees to the World Series in his 2nd year. Likely a reason Altuve won it was because of his playoff performance.

The MLB should’ve put their foot down on this situation as they didn’t give strong punishments, and this could likely make other teams perform these same atrocities. Fans and players are all calling for suspensions and the title to be revoked from the Astros. Already in spring camp, the Astros lead the league in hit by pitches which is a clear sign of disdain toward the team.