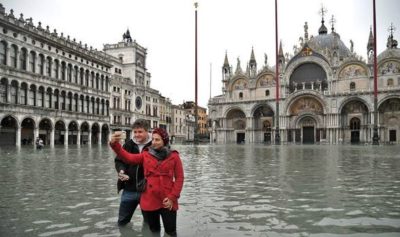 The Mayor of Venice, Luigi Brugnaro stated on twitter today, “Venice is on its knees”. A historic flood has swept through the city leaving it under three feet of water. This flood has been recorded as being the cities “second highest flood” in its history according to Slate News. The media source ANSA reports that the water level could even rise up to five feet. Venice is currently under a state of emergency as declared by the Mayor. He also added that the flooding is “the effects of climate change… the costs will be high”, according to BBC news. One of the areas that had been most affected was St. Mark’s Square since it is one of the lowest lying areas of the city. An important landmark, St. Mark’s Bascilla was flooded for the sixth time in 1,200 years according to the church’s records. Although the alarming part is that four of those floods have occurred in the past twenty years. Currently, the Mayor of Venice is trying to look for aid from the government as the damage that is being done to the city is devastating.