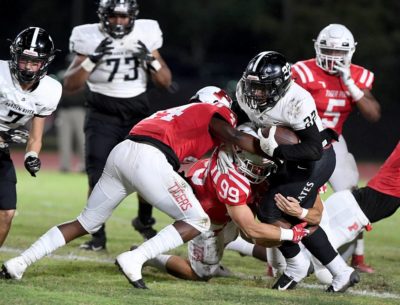 Your Palmetto Tigers were set to face off against the Braden River Pirates for the first round of the playoffs. The Pirates opened up to a quick lead on a touchdown run and a touchdown pass by Robby Goecker. The Palmetto Tigers then shortly later giving Braden river a short field and they scored shortly after all this happen in the first five minutes. Then the Tigers made a goal line stand and got a safety thanks to Kevion Williams. Then the Tigers capitalized on the short field by scoring on an 11-yard Sagel Hickson touchdown. The Tigers defense then made a stand and made the pirates punt, LaJohntay Wester made a great return to the Pirates 26 yard line. Going into the half the Tigers were down 14-10. Coming out of the half the Pirates defense forced the Tigers to punt and scored Robby Goecker scored on a reception. The next Tigers possession Xavier Williams scored on a read option play. The Tigers were in need of a score and did so with an 80-yard touchdown to LaJohntay Wester. The Tigers defense held for a 24-21 Tigers victory. The Palmetto Tigers will advance onto the second round where they will play the Port Charlotte Pirates whom they had beaten 47-7 earlier in the regular season.