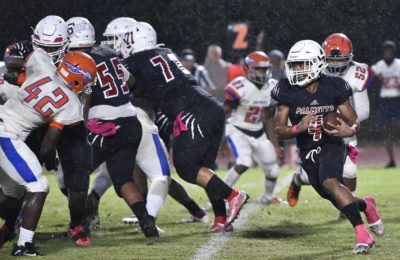 The Palmetto Tigers went up against the Southeast Seminoles in a district match up. The Tigers opened up with the ball in the first half and instantly, the weather played a major factor in this game. After trading drives, Palmetto drove down the field. Xavier Williams capped the drive off with a 2 yard QB sneak.

The next Seminole drive resulted in a 29 yard pick 6 for Palmetto’s star defensive back Daemon Hill putting Palmetto up 14-0 with 3:00 left in the 1st quarter. The rest of the 1st quarter was rather uneventful. With 5:00 left in the 2nd quarter, the Seminoles were forced to punt from within their own 10 yard line. The punter then had a -2 yard punt which gave the Tigers great field position. Xavier Williams then found a wide open Kevion Williams in the back of the end zone for an 8 yard touchdown.

The Tiger defense once again steps up stopping the Seminoles on 4th and 1. Sagel Hickson had a 24 yard run from Southeast’s 28 yard line to set Palmetto up on the 4. Xavier Williams then had another QB sneak touchdown from the 2 yard line, putting Palmetto up 28-0 with the first half coming to a close.

The 2nd half opened up with the weather getting worse and worse as the game continues. Most of the 2nd half was a defensive battle with both teams stopping each other on multiple occasions. The game continued onward with each team battling to find the end zone in the 2nd half. The final score was a shutout 28-0 for the Palmetto Tigers. With that win, they are now the class 6A District 12 Champions. This is their first district championship since 2011 and the Tigers had a clean sweep in their district. The Tigers are going to be playing Tallahassee Lincoln. The Tigers are hoping their undefeated season alive and try to make a deep run in the playoffs.