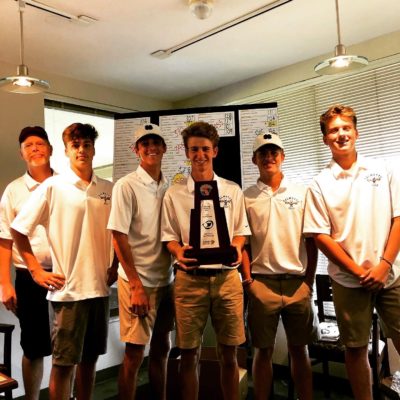 October 15th, a day that will stand in infamy for the Palmetto High Golf team. The boys took on Mangrove Bay Golf Club as well as countless other teams. This was exciting round for the Tigers because they knew they had a chance to take home a trophy and that’s exactly what they did. Although there was one thing in the way: Countryside High School. Both of these teams shot a 339 as a team and to determine a runner-up position, there had to be a playoff. The teams went back out to play the 18th hole, a 444-yard par 4. One of the hardest holes on the course. The top 4 scores were going to count out of 5 golfers for this one hole. The top scorers on each team teed off first. Jonathan Hamm and Countryside Highs’ lowest scorer both got pars. Then Tyler Mcloed and Travis Booth played the hole. Mcloed got a par and Booth got a bogey. Luckily, the other team both got bogeys making the Tigers one up. Then Seth Durrance and Landing Sellars teed off. Sellars started to cramp up and was not able to continue playing the hole so the teams hope was on Durrance. Durrance had an excellent shot into the green where he then two-putted for a par. The two boys on Countryside got a bogey and then a double-bogey. This gave the Tigers a runner-up trophy winning the playoff 17-19. The boys are going to regionals on Monday, October 21st. The trip down to Naples will be a long one but worth it for the Tigers. This hard working year payed off and now the players get a shot to move onto states! Go Tigers!