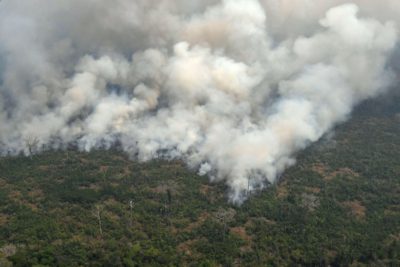 Early August, almost three weeks ago, the most detrimental forest fire to the Amazon in Brazil had begun. Over the course of several years, there has been over 75,000 forest fires in Brazil. While natural fires occur often and are healthy forth rain forest, these fires  have pushed the Amazon to a near point of devastation. There is thousands of miles of lost land and lost habitats to wildlife that used to flourish there. The Amazon is a place known for its wet biome, is now unusually dry due to record high temperatures. This allows the forest to become brittle and dry enough to support a massive fire like the one occurring now. Human activities such as burning of fields for agriculture is the main cause. Brazilians have also become upset with their President, Jair Bolsonaro, for his lack of effort to control and put out the flames. He recently declined a $20 million donation from G7 because he wants an apology from French President Emmanuel Macron for past issues between the two.

More than 1,330 square miles of the Amazon rain forest have been lost since January; a 39 percent increase over the same period last year, as reported by the New York Times. This tremendous amount of forest being lost is resulting in less oxygen to support human life. The Amazon’s amount of trees and vegetation is so vast that it actually supplies 20% of the Earth’s oxygen. This means that this isn’t just a problem affecting South America. It affects you and I and the billions of others around the world. The fire is also contributing to global warming with the CO2 emissions coming from the furious flames which will ultimately affect everyone on earth as well. On the bright side, when humans failed to extinguish these fires, mother nature prevailed. It started raining over parts where the fires were once blazing thus putting it out. Taking care of our environment especially in times like this should be a priority because we only get one Earth.