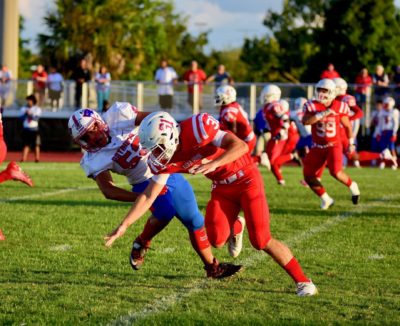 The Palmetto tigers faced off in a fierce battle against the Pinellas Park Patriots this past Friday August 23, 2019. The game began with your Tigers kicking off. They came out of the game hot on defense pushing the Patriots to a three and out forcing them to punt from inside their own 10 yard line. The offense has many weapons this year and can score from anywhere on the field in a number of ways. However, the offense started off slow. On the Patriots’ second drive, senior linebacker Matthew Wyatt intercepted a slant and returned it all the way down to the opponents ten yard line. Taking advantage of the great field position, Xavier Williams rolled out and threw a laser to Curtis Thomas to increase the Palmetto Tigers lead to seven. With a pair of field goals, the Tigers were able to bump the lead to 13-0 as the half expired. Palmetto’s defense absolutely dominated the first half by not allowing the Patriots offense to cross the 50 yard line. The Tigers came out in the second half even hungrier than in the first. On the Patriots first play on offense, their running back, a 4 star FSU commit, coughed up the football for the second time that game. Although the Patriots second drive ended as a touchdown . The Tigers offense was not done they then came out on their next drive and Curtis Thomas scored another touchdown. This increased the Tigers lead to 27-7 which ended as the final score. Overall, the Tigers dominated on defense with 4 takeaways and a touchdown while the offense had a solid game with 2 touchdowns and 2 field goals. Next week the Tigers will take on their cross river rival Manatee where we expect the same results.