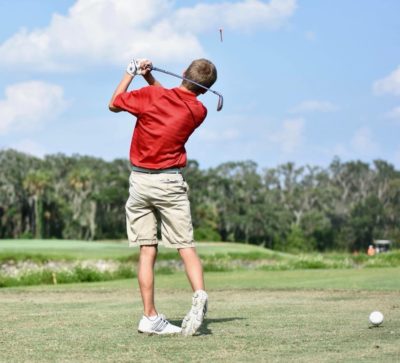 On Thursday, August 22nd, the Palmetto Tigers boys golf team took on and dominated the Manatee Hurricanes. The boys have been fighting heavy rainfall as well as poor conditions of the course due to the immense amount of water. The starting five golfers for the Tigers were Tyler Mcleod, Travis Booth, Jonathan Hamm, Seth Durrance, and Jackson Malartsik. Just hours before the match, Landing Sellars became sick and was unable to play. The boys had a great match shooting 161 as a team which is a new best under new coach, Fred Tyler. The team was led by number one seed Tyler Mcleod who shot an even-par 36 on nine holes. The rest of the team played great; with Jonathan Hamm shooting a 41 and Seth Durrance and Travis Booth both shooting a 42. The Hurricanes did not stand a chance against the Tigers as they got crushed by 40 strokes.  Manatee played a good game but couldn’t compete with Palmetto. Palmetto will face off against Manatee again on September 19th on Manatee’s home course where we expect the same results.