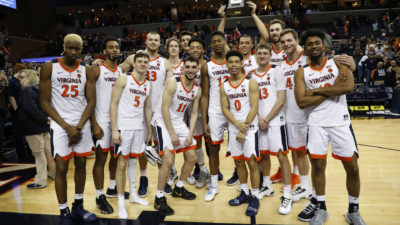 The MADNESS is over, the No. 1 seed Virginia Cavaliers have won the March Madness tournament. Virginia played No. 3 Texas Tech Red Raiders, and beat them 85-77 to win the NCAA Tournament. With Virginia winning the thrilling overtime game, that gives the Cavaliers there first national championship in program history following a huge upset the prior year.

Most people who did a March Madness bracket had their brackets messed up within the first round, when UCF beat VCU, when UC Irvine beat No. 4 Kansas State, when No. 5 Wisconsin lost to No. 12 Oregon, and a few more upsets.

In the 2nd round of March Madness, the UCF Knights faced the heavily favored Duke Blue Devils (No. 1), and it came down to the the last shot and Duke barely got out of the arena with a win with a score of 77-76. That was the story-line of the 2nd Round, because it made people question if Duke was capable of winning a championship. The same thing happened in the next round known as The Sweet Sixteen, Duke faced No. 4 Virginia Tech, and only won by one possession as the score was  75-73, and once again, came down to the last shot. Also, the unthinkable happened, on the other side of the tournament, the other heavily favored No. 1 UNC Tar Heels lost to the No. 5 Auburn Tigers 97-80, which made people go crazy because their brackets were even more messed up now.

In the next round, the round known as the Elite Eight, the big storyline was how Duke ended up losing to No. 2 Michigan State Spartans 68-67. Duke had been the favorite from the start of the season to win the championship. The electric freshman Zion Williamson was expected to be an unstoppable force but the Blue Devils just couldn’t pull through. Virginia is a prime example of team chemistry. With a large amount of their players being upperclassmen, this gave them the advantage over schools with a lot of one-and-done’s. Virginia battled their way through the last few seconds in multiple games to advance to the championship.