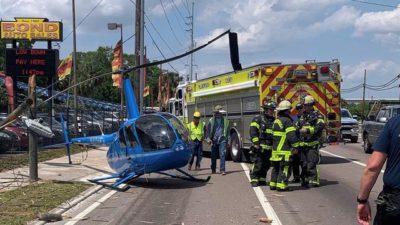 The emergency landing of a Robinson R-44 helicopter near Palm River Road and South 50th Street shortly after 2:00 pm on April 4 ended in the unfortunate death of 72 year-old, Deodat Gangapersaud in the passenger’s seat of a truck driven by his 35 year-old son, Ryan Persaud, who suffered minor injuries.

According to Hillsborough Sheriff Chad Chronister, Gangapersaud was killed when the helicopter’s rotor struck a telephone pole, causing the rotor blade to break off and fly though the windshield of the Chevrolet Silverado carrying Persaud and Gangapersaud.

National Transportation Safety Board (NTSB) investigator, Dan Boggs said to ABC News that the helicopter had recently been serviced, and made it clear that the helicopter’s pilots, 39 year-old Bryan Messick and 21 year-old Joshua Wells, did all they could.

“The pilot did a great job. He came in; he was autorotating, which means he was using gravity to make sure the rotor blades were spinning fast enough. I looked at the surveillance video, there was a truck underneath him. He made sure he did not land on the truck; he was floating it as hard as he could until the truck passed by. If [the crash] had happened on grass he would have probably stopped right where he had landed. He really did about the best job you could do in that situation”

Boggs added that the helicopter was only “a couple months old” and that the National Transportation Safety Board will preform “a complete and full investigation.” Based on the timelines of similar incidences, the NTSB should release a preliminary report in several weeks, but will likely take upwards of a year to publicize their final report.