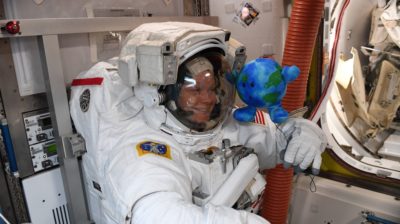 Earthy (also known as Ziggy or Daughter Earth) is a basketball-sized plush Earth that rode up to the International Space Station on SpaceX’s ‘Demo 1’ mission aboard the experimental Crew Dragon spacecraft. The Crew Dragon spacecraft carried Earthy to the ISS on March 3 and returned to Earth on the 8th without the plush. According to their twitters, NASA astronauts Anne McClain and David Saint-Jacques enjoyed Daughter Earth’s company on the station so much that they decided to keep her. McClain shared photos of Earthy  accompanying her during interesting little tidbits of life on the ISS, such as: zero-g morning coffee, sightseeing, workouts, garbage disposal, station maintenance, trying on space suits, and operating the station’s robot arm. Saint-Jacques shared pictures of Earthy aboard the Soyuz spacecraft with the rest of the station’s crew during a lifeboat drill. All in all, Earthy seems to be having a pretty fun time on the International Space Station.