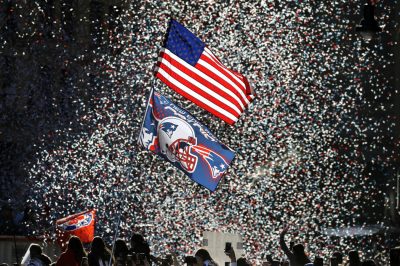 In the 2019 Super Bowl (Super Bowl 56), the Los Angeles Rams faced the New England Patriots for the second time. Their first championship faceoff was in 2002 at Super Bowl 36 where the patriots won with a score of 20-17 over the heavily favored Rams. This time around, the Patriots were favored and the People’s Champ, but the Rams were looking to upset the Patriots.

Both teams had the number two seed in the playoffs, as the Patriots were coming out of the AFC (American Football Conference), and the Rams were coming out of the NFC (National Football Conference). The Rams beat the Dallas Cowboys in the Quarterfinal game and the number one seeded Saints in the semi-finals, but that game had a controversial call, or more like a ‘no-call’. In the fourth quarter, on one of the most important drives of the game, it was third down with ten yards to go and Saints quarterback, Drew Brees, lobbed the ball to Tommylee Lewis. Lewis was hit by Rams defensive back Nickell Robey-Coleman, but not just hit, he was hit before the ball got the Lewis. The refs threw no flags and when what should have been a penalty was left alone, the Rams ended up winning that game by a close score. The Patriots also had a controversial call as well, when they played the Kansas City Cheifs in their semi-final game. In the second quarter of the game, Tom Brady dropped back for a pass and was sacked. The referee called it ‘roughing the passer,’ which did not receive much support because Brady was barely touched. That game was close as well, and on that drive the Patriots ended up scoring a touchdown.

The Super Bowl ended up being the lowest scoring game in history as the final score was 13-3, played at Mercedes-Benz Stadium, in Atlanta, GA, with the Patriots coming out on top. Defense definitely dominated this game, holding truth in the saying, “defense wins championships.” Julian Edelman was the Most Valuable Player (MVP) of the game finishing with 10 catches for 141 yards.

“I wanted the Rams to win because I love the underdogs, and I am tired of seeing Tom Brady win,” said freshman Clayton Gullett.

The young Rams had a really good season, finishing with 13-3 in the regular season, and the Super Bowl champion Patriots finished with a record of 11-5 record.