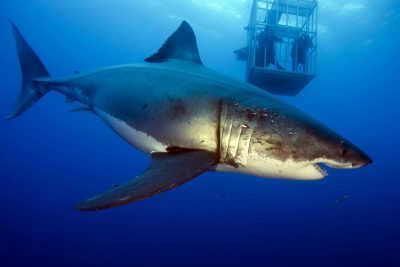 We all know how big sharks can grow to. There are over 100 different species of sharks and their size ranges from as small as the length of your arm to as big as a school bus. One of the biggest species of sharks know to man is the Great White. One shark out of all the Great Whites is so known to the world that she even has a name. Deep Blue was first discovered over five years ago in 2014. The last few sightings of Deep Blue were at Guadalupe Island off Mexico’s Baja California peninsula. However, just over eleven days ago Deep Blue was spotted off the coast of Oahu, Hawaii. Photographer George T. Probst was the first one to sight Deep Blue in Oahu. To confirm his sighting, he compared the photos off the Guadalupe Island database to previous pictures of her taken from years past. Mark Mohler captured breathtaking pictures of Big Blue and three fellow tiger sharks feeding on a whale carcass. At this moment, Big Blue is known to be about twenty feet long and she is considered to be one of the biggest great white sharks ever recorded. There are speculations that the shark was “shockingly wide” and possibly pregnant according to Shark Conservationist Ocean Ramsey. Deep Blue is a record breaking shark and this only leaves the thought that there is more that the deep ocean has to hide.