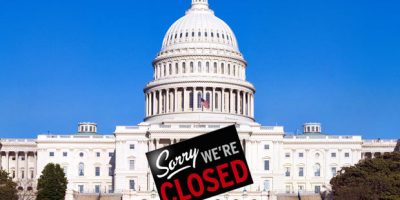 The United States government has set a new personal record, although this record isn’t exactly one to be proud of. On December 21, 2018 the government shut down due to controversy over the need for border security along the southern border. On January 12, 2019 this shutdown become the longest in U.S. history and there is no end in sight. President Trump and the Republicans have been pressing for a wall to span across the southern border between the U.S. and Mexico. President Trump and the Republicans feel just as strong about getting this done as Democrats feel about preventing the wall and funding for it. A government shut down happens when one of Congress’ spending bills runs out and there has to be a new one made. Typically, the bills will be remade quickly and there’s no hassle or shutdown. But other times, there is major disagreements on how those bills should be spent. With no plan for funding, government services slowly shut down and either furlough their workers or force them to work without pay.

This shut down has turned into something more than just a push for border security, this has turned into a symbolic sign of will; which side will cave to the other first. Today’s political agendas are “my way or no way,” and that’s the state of mind that our government seems to be in right now. Slight controversy about this shut down has derived from stories told by Minority Leader Charles “Chuck” Shumer and Speaker of the House Nancy Pelosi about the Presidents’ actions in meetings. The meetings have turned less professional and more into a drama. Chuck Shumer said President Trump “slammed the table and walked out of the room” when the Democrats said they wouldn’t give in to fund the wall. Our President later tweeted that it was a lie and that he, “politely said bye-bye and left, no slamming!” With no end in sight, this shut down could go onward until President Trump either reopens the government, Democrats agree to funding the $5.7 billion wall, or the President declares this a national emergency. Although President Trump has said that he, “is not looking to call a national emergency…this is so simple, you shouldn’t have to do it”. Regardless of whether that incident is true, our government shouldn’t even be in the position to have these stories told.

Despite very little efforts to compromise, democrats have offered the President $1.3 billion to continue the funding of current border security and to pursue other ways of controlling our border but President Trump declined. Republicans say the wall needs to be built as not only a way to drastically decrease illegal immigration, but as a symbol that the U.S is taking a strict stance to secure our borders. The wall would also encourage legislation to force companies and employers to require proof of legalization before hire which would also deter illegal immigration. The wall is also commonly mistaken as a way to keep out all Hispanics south of the border when it is simply there to prevent illegal immigration. The wall wouldn’t be a measly 10-foot chain link fence, it would be around 30-feet tall and run nearly 10-feet underground to prevent digging underneath. The cost of illegal immigration to the U.S. is $54 billion-$113 billion every year. The cost of the wall will essentially “refund” itself in less than a year.

On the other end of compromise, President Trump may be on the verge of offering legal status to over 800,000 people that were brought here illegally as children in exchange for the border wall. In short, democrats argue that a wall is a “medieval” way to prevent illegal immigration and we should take advantage of cheaper technological ways to prevent it. These ideas range from more border control stationed along the border, upgrading ports of entry, and fixing the asylum system. We already have 654 miles of fencing along the border as well. Between 2010 and 2015 that fencing was breached roughly 9,287 times. Another means to prevent illegal immigration would be to better our relations with Mexico and work out a deal to get them to join in the efforts to stop illegal immigration. Another argument is that there are just simply better ways to spend $5.7 billion. For example, Flint Michigan’s water crisis, which has been going on for 3 years, could be solved with $1.5 billion. Other things are providing medicaid for 1.4 million people, more than double the federal budget on renewable energy, increase federal aid to k-12 schools by 30%, double heating assistance for low-income households, and many more.

No matter your position on the wall, there’s one thing we can all agree on: It would be beneficial to most if the government reopened. There are also many sides to a story when it comes to a political discussion as big as the wall, so all information should be taken with a grain of salt.