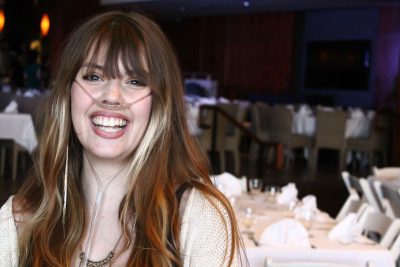 For all of her life, Claire Wineland had lived with Cystic Fibrosis, which is a hereditary and terminal disease that affects the body’s lungs and digestive system. However, Claire made a choice not to wallow in the sadness of her illness, but instead to share the details of her life through social media platforms. Wineland spoke openly about her illness and her preparation for death, as well as her 6 near death experiences. Although this may not be the most cheerful chat, it drew in many viewers and people who offered support for her. It was Wineland’s humorous, and confident personality that was largely responsible for her ability to make the harder topics that she discussed become easier to listen to.

At 13, Wineland got a blood infection after one of her surgeries and it caused her lungs to collapse. She then went into a medically induced coma for several weeks. Soon after these events, Claire decided to start a foundation she named “Claire’s Place” to help others living with Cystic Fibrosis.

“To date, the foundation has helped more than 100 patients,” says journalist Jessica Militare from Glamour.

It offers both emotional and financial support to the families directly affected by CF. This foundation was a way for her to give back to those experiencing what she was too and to offer hope and help.

According to Claire’s Place Foundation, Claire was a “singer, an artist, a composer, and a natural-born comedian. She radiates with a warmth and wisdom beyond her years.” The charismatic young woman made such a difference in the world, and at such a young age. With inspiring so many to live their lives without anything holding you back from it, to starting a foundation that has been such a help to other families going through the same thing hers was, to so much more. Claire left a mark that is long-lasting.

She was remarkable and becoming very well known. She wrote a book titled “Every Breath I Take, Surviving and Thriving with  Cystic Fibrosis.”  She became a TEDxSpeaker, received multiple awards and was featured on ABC news and People magazine and more. The events Claire had gone through had caused her to become a spokesperson of Cystic Fibrosis. She showed in her videos how to enjoy living life. She believed in keeping a positive attitude and says “this is the key to living a fulfilling life – despite being burdened with such a deadly disease,” according to Claire’s Place Foundation.

After a sharp decline in Wineland’s health, she was told she needed a lung transplant very badly.

“More than 8,900 supporters helped Wineland raise $265,000 on GoFundMe to pay for the cost  associated with the procedure,” according to The Washington Post. Claire was absolutely overjoyed and in disbelief at the amount that those who supported her helped her raise. She expressed her excitement and gratitude in her video titled “thank you” that she uploaded to her YouTube channel.

According to a statement that her foundation made, after her double-lung transplant procedure was a successful, she was taking time to recover. On August 26th she had suffered a terrible stoke due to a blood clot. Claire Wineland was always preparing for the end with every surgery she would undergo she explained in her YouTube post “What It Feels Like to Die.” She was taken too soon but not before leaving her lasting mark on the world. Her memory lives on as does the help her foundation continues to bring to others living with CF. She made the most out of life and brought awareness to her disease along with so many other things and the inspiration she gave to others is truly significant, as is she.