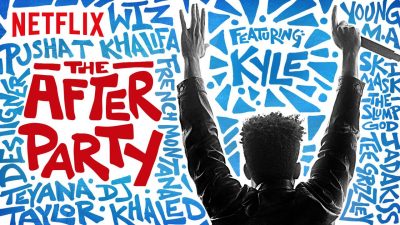 Netflix originals have been taking off lately, with the most recent of them being the movie “The After Party.” The movie was produced by the late Lee “Q” O’Denat; the man who made WorldStar Hip Hop. The movie is about an aspiring Soundcloud rapper named Owen just trying to make it big in the world of Hip Hop. Owen is played by a famous rapper in real life, named KYLE. Owen gets famous for all the wrong reasons and gives up on his dream but his friend Jeff then does everything in his power to get him a record deal in one night.

There was plenty of scenarios in the movie that young people all over can relate to and so many appearances by famous rappers, including: Wiz Khalifa, Pusha T, Dj Khaled, and Young M.A. The idea of “soundcloud rap” is promoted in the movie and social media is a giant influencer for the up and coming rapper. Owen was given a taste of reality when he was made into an internet meme. He started trending on Instagram and Twitter overnight which is extremely common in social media today.

Although it wasn’t the comedy and the crazy night they had that made this movie so good; it was the message it sent to the audience. The people that this movie reached out to were older millennials who were struggling to figure out what they wanted to pursue in life. The main message of the movie is to never give up on your dream. All it takes is one breakthrough moment to achieve what you had been striving for for years. In the movie everything that could have went wrong for Owen went wrong, so  he gave up on his dream and had to face a reality he didn’t like. Having a real friend and supporter by your side is another important message from this movie and an important message to remember as a hard working millennial, chasing a dream. Without Jeff, Owen’s best friend, Owen would have given up on his dreams altogether and Jeff believed in Owen when no one else did.

Netflix is trying to broaden their audience by creating original movies that reach out to all different types of entertainers and young kids trying to figure out their life. Movies like “The After Party” are proving that social media can be the most influential tool to help you reach a dream you have had for years and shouldn’t be neglected by older generations.