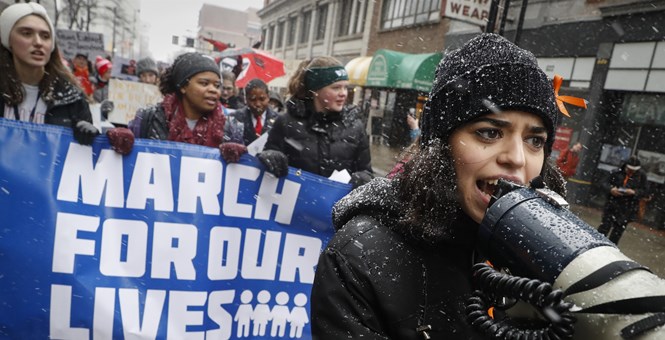 Four months have passed since the deadly massacre at Stoneman Douglas High School occurred. Students and supporters across the country are holding strong to the movement being led by strong willed and determined activists Emma Gonzalez and David Hogg. On June 15th the revolutionary movement changes grounds in further efforts to inform the younger generation on the power of their votes and the opportunities for their voices to be heard.

“When people across the country rallied at the March For Our Lives just over 2 months ago, we showed our politicians that we refuse to accept gun violence as an unsolvable issue. Now it’s time to turn our energy into action.” said Marchforourlives.com/road-to-change.

Following the “Peace March” on June 15th The Road To Change Movement begins in Chicago. The movement plans to inform people across the country the importance of voting, by helping register young potential voters, educating those who wish to become voters, and motivating those who aren’t to become voters. The movement will span across over 20 states, including Texas and California, and nearly if not more than 50 cities. The activists on the tour will visit communities affected by gun violence and also plans to make stops at districts who they accuse the NRA has of ‘buying politicians’.

“At each stop, we’ll register young people to vote and educate them on the reforms we need to save lives, and whether their local elected officials support these reforms or support the NRA.” said said Marchforourlives.com/road-to-change.

The movement however, has not ignored Florida. The state of Florida, being the birthplace of the March For Our Lives movement will have its own tour. With the Road to change movement planning to visit every congressional voting district in efforts to ensure that victims, activists, and young voters voices everywhere are heard in efforts to meet the goals of the campaign.

The movement is one of the most powerful of this day and age and arguably one of the most fiercest around. Still, following the Sante Fe Texas shooting, supporters of higher gun control will not be silenced so easily. In efforts of spreading awareness and knowledge the Road to Change hopes to further bring change to the world around them. The March For Our Lives movement had a big hand in changing of Florida Legislature: changing the age limit on purchasing guns from 18 to 21, creating a waiting period for those who wish to purchase a gun, banning bump stocks, and expanding funding that goes towards regulations and services regarding mental health. They are not about to stop now, by informing more people across the country the future holds nothing but change for the voices waiting to be heard.