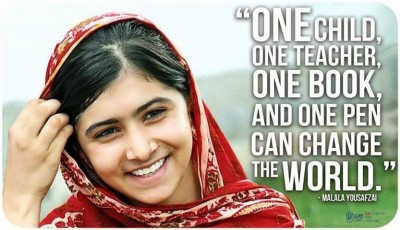 Malala Yousafzai is a women’s education activist, from Pakistan, who first made headlines in 2008 when she delivered a speech protesting the Taliban, after they took away women’s rights to education. Two years later she came back into the eye of the media when she was stopped on her ride home from school and shot in the head because of her activism against the Taliban. Ever since that day, she has been going all over the world speaking out for women’s rights to education.

Most recently, she has been putting her efforts towards India and getting big corporations to support women’s education.  In the last month, Malala has made huge strides in this effort. She attended the World Economic Forum’s annual meeting in January where she talked to the heads of many huge corporations all over the world. One of the biggest achievements that came out of this meeting was The Malala Fund’s new partnership with the technology super corporation, Apple.

With this new partnership, The Malala Fund is now expected to be able to double the amount of grants they can give to children who live in places where it might not be possible for them to further their education on their own. She has been working towards her dream to ensure that every girl gets access to the right of 12 years of free, safe, and quality education since 2008 and this has been a huge step forward for The Malala Fund.

”My dream is for every girl to be able to choose her own future,” said Malala in a recent interview.

Up until now, The Malala Fund has been focusing its efforts in Afghanistan, Pakistan, Lebanon, Turkey, and Nigeria, but with the recent partnership of Apple, Malala has stated her hope to start reaching one of the worlds most populated countries, India. The people in India have welcomed Malala with open arms and much gratitude. There is no telling the kind of impact Malala has still to make on not just India, but the rest of the world. At only 20 years of age, there are so many things she is still hoping to accomplish, and her determination has proven that she will fight with everything she has to achieve her dreams.