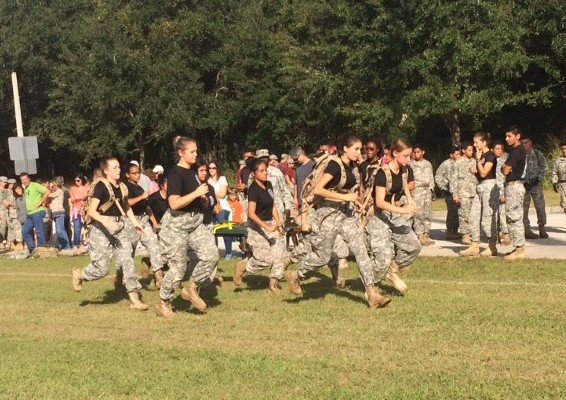 Saturday October 29th was districts for the Varsity Male, Female, and Mixed raider team. Teams arrived at Braden River High School at 6:30 in the morning awaiting their first event, the 5K run at 7:45.  Events at the districts included the rope bridge, litter carry, tire flip, and an obstacle course, where cadets had to do a series of events including carrying a boat and running with two 35 pound dumbbells. Cadets competed from 7:45 to 1:00 p.m.  Awards were held at 1:00 p.m. and they presented the third second and first place winners in each event, as well as the over all winners in the competition.

Starting with the 5K, Palmetto placed Second for the Varsity Male and First for the Varsity Mixed team. Next was the awards for Rope Bridge which PHS received third place for Female Team and first place for Mixed team. The litter carry event consisted of the Male team receiving third and Mixed received second to Lakewood Ranch.  The tire flip was only placed by the Mixed team, who received first place. The only team to place over all was Mixed team, who came in first! Overall, an extremely successful competition and the teams are all very excited for Districts In two weeks!! Mung Ho!!!!!!!