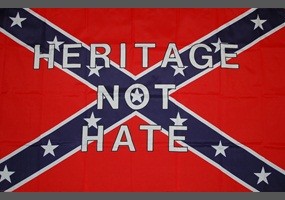 Everyone nowadays seems to forget the significance of history. Our own American history holds the most importance for me. We have so much we can learn from our past and there is so much we can grow from. But this has become the

class in school students tend to blow off and fall asleep in. It seems that people do not see the beauty in history. They do not take the time to feel the passion our nation’s leaders had for this country when they were fighting the Revolutionary War. No one seems to think twice about the civil struggle of freedom for all or the heartfelt battle for women’s rights.

A while back, I read a status on Facebook discussing how everyone who sports a rebel, confederate flag is seen to be a “representation of racism” and there is only one agenda for waving a confederate flag; and that is racism.

The flag we see today and associate with the southern secession, was actually their battle flag, but there were many before the one we know today.  The southern flag was not made to advertise racism and slavery; it was to show they did not want to be a part of the union. This was simply because the north was not treating them justly. Some could even argue tha

t the north were the bad guys in all this. The Civil War did not start over slavery. Lincoln wanted to keep the union together when the south wanted to secede. Lincoln did not even sign the Emancipation Proclamation until 1962, after the Battle of Antietam, a year after the Civil War broke out.

of what it truly is, and they refuse to accept the truth.