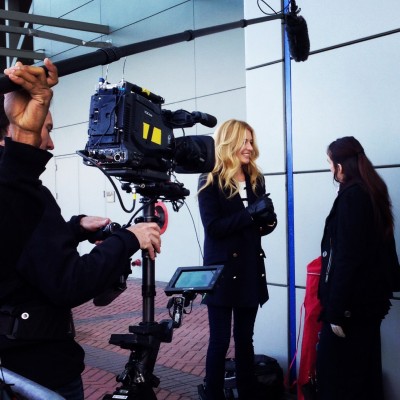 The TV dance competition So You Think You Can Dance has been, and always will be, my favorite reality TV show, and is basically the only one I would watch. However, after going to one of their auditions, I realized that even this show was not what it had seemed. Most people do not realize that reality TV is the farthest from real life that anyone can get. Everything is staged and there is no real emotion.

The audition that I attended was held in New Orleans, Louisiana at their main convention center. On the first day, January 31, the audition notice stated that the doors would not open until 8 am but the camera crew would start filming promotional shots at seven. What that notice did not tell you, however, was that the line started forming at three in the morning and if you wanted to get a good chance of making it through you should be there at around that time. At about four am, we arrived at the convention center and found a line of people already waiting at the far end of the building. The convention center is a community building that stretches maybe five blocks wide and what we did not know was that the line was actually supposed to be started on the opposite end and we were luckily informed of this shortly when a competitor noticed us on his way to the real line and straightened us out.

By the time we got to that side of the building, which was what seemed like a 30-minute walk, the line that had been formed was even shorter than the line that we started. The only difference was that on the wall behind them there was a tiny sign that read “line begins here.” So we reluctantly sat down against the wall and continued our boredom-filled wait.

When the camera crew finally did show up, along with a few local news trucks, the sun was rising along with the amount of people showing up. At 8 o’clock, the crew wrapped up the different crazy dancing mobs they had started and finished their slow motion filming stunts. A few minutes later, the host of the show, Cat Deeley, stopped by looking like she just stepped off a runway and walked down the line where she would pick people that looked the most interesting and asked them random questions for a couple minutes until they got boring.

The process then continued to the camera crew crowding by the doors where they had all of the people auditioning run towards the door with excited faces. After doing this a few times, they had everyone line back up outside so they could send them in ten at a time. This was one of the first hints towards how unrealistic this show truly was.

When you are watching the auditions as they air on TV, you see that the dancers come up and perform to their song choice until the panel of judges stop them and give them their verdict. The moment of truth, whether they give you a ticket to the boot camp in Vegas or not. But the reality is that there are multiple moments of truth before you even get in front of those judges, none of which are televised. These harder rounds consist of 30 seconds of improvisational dance in your genre of choice to a random song in front of the producers of the show. If you do not make it through three rounds of this, in which the stakes get higher each time, then there will be no opportunity to even go on stage in front of the judges and prove yourself worthy because you will be sent packing. Another aspect of this show that is different from what is expected are some of the promotional shots. When the show is aired and there are some spots where there is one dancer seen doing some sort of awesome trick or jump in front of a monumental site in the city where the auditions are taking place, they are actually just doing that in a dark room with a black background and spotlights on them. The scenery is not added until the editing stage before the episode is aired.

Along with this, things like the emotion of the competitors and the injuries that are seen are completely fake. These additions are put in to make the viewers more amused and interested in the show. They also tend to pick the weirder or more “original” dancers and leave the dancers who can actually dance to go home. One 18-year-old boy that was there was such an amazing dancer that the producers had him dance in every genre and even had one of the dancers from a previous season go up and dance with him, but even he was cut before the final round. All these people want is a fantastic show and good entertainment. To avoid controversy, they even made their motto as looking for the “favorite dancer” and not necessarily the “best dancer.” While it was fun to visit the historic city of New Orleans and have a great adventure along the way, I learned that when it comes to reality TV nothing is what it seems. Moreover, I will never think of this show or any other reality TV show the same way because of it.

Sharing
Tags reality tv, so you think you can dance, sytycd